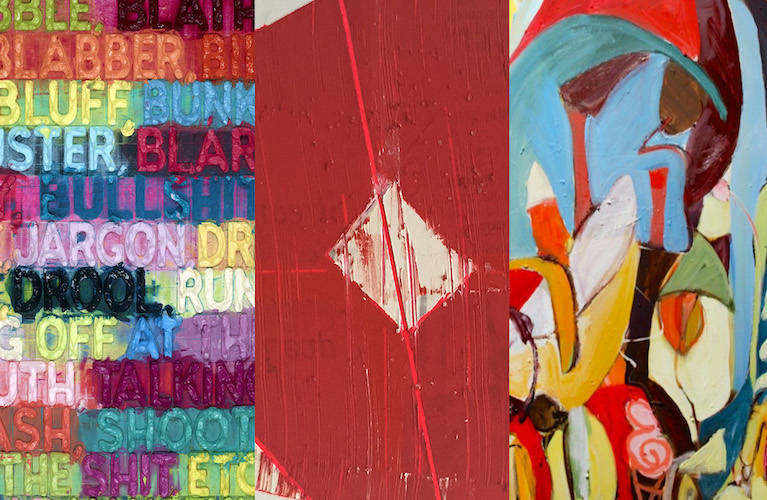 Posted at 12:55h in exhibitions by Marco Sassone
Share

metroquadro presents a selection of works of the three gallery’s American artists :

In 1966, he exhibited at the School of Visual Arts Gallery of New York, what will be considered by the critics the first exhibition of Conceptual Art, movement which he will be associated to, despite himself.

His work has always focused on language, its meaning, and representation. He has been exhibiting, in solo and group shows, in private galleries and museums all over the world, and his works are in important public collections, including MoMA NY, Centre Pompidou in Paris, Tate Gallery, London, National Gallery of Art, Washington, MoCA Los Angeles.

According to this recent article by Artsy, Mel Bochner is at ninth place among the most in-demand artists at art fairs in the first half of 2019. Lives and works in New York.

Received his BA and MFA from the Yale School of Art, where he studied under Al Held. Moving to New York during the mid-1970s, Row was part of that generation of abstract painters that included Peter Halley, Ross Bleckner and Mary Heilmann.

He was awarded the National Endowment for the Arts Grant in Painting (1987) and the Isaac N. Maynard Prize for Painting from the National Academy Museum, New York, in 2008.

He exhibited in numerous solo and group shows in prominent American and international galleries.

He has been teaching in several Institutions like The Cooper Union, Rhode Island School of Design, Pratt Institute, Princeton University, Fordham University, and he is now a teacher at The School of Visual Arts in New York.

His works are in the permanent collections of, among others, the Carnegie Museum of Art in Pittsburgh, the Brooklyn Museum, the Cleveland Museum of Art and the Museum of Contemporary Art, San Diego.

The youngest of the three artists on show, Monique Rollins received a BA from Syracuse University in New York in 2002. In 2006 earned a Master of Fine Arts degree in Painting, a Master of Science in Theory, Criticism and History of Art Degree, specializing in Venetian Renaissance, and a Museum Studies Certification from Pratt Institute in Brooklyn, NY.

Rollins lives and works between New York and Florence, and has been exhibiting Internationally for over a decade.

In 2018 The Delaware Contemporary Museum traveled her exhibition, Eastern Poesia to China to the Zhu Naizheng Research Center for Art in Beijing and also the American Center, in Beijing, China. Rollins has had solo exhibitions at the Delaware Contemporary Museum in Wilmington, Delaware, the Shevchenko National Museum in Kiev, Ukraine, the American Embassy in Rome’s Tri Mission Art Gallery, and at Art Central Hong Kong. Her paintings are also in the Official Residence of the Ambassador to the European Union in Kingston, Jamaica, as well as in many prominent private collections in North America, Asia, Europe, and the Caribbean.