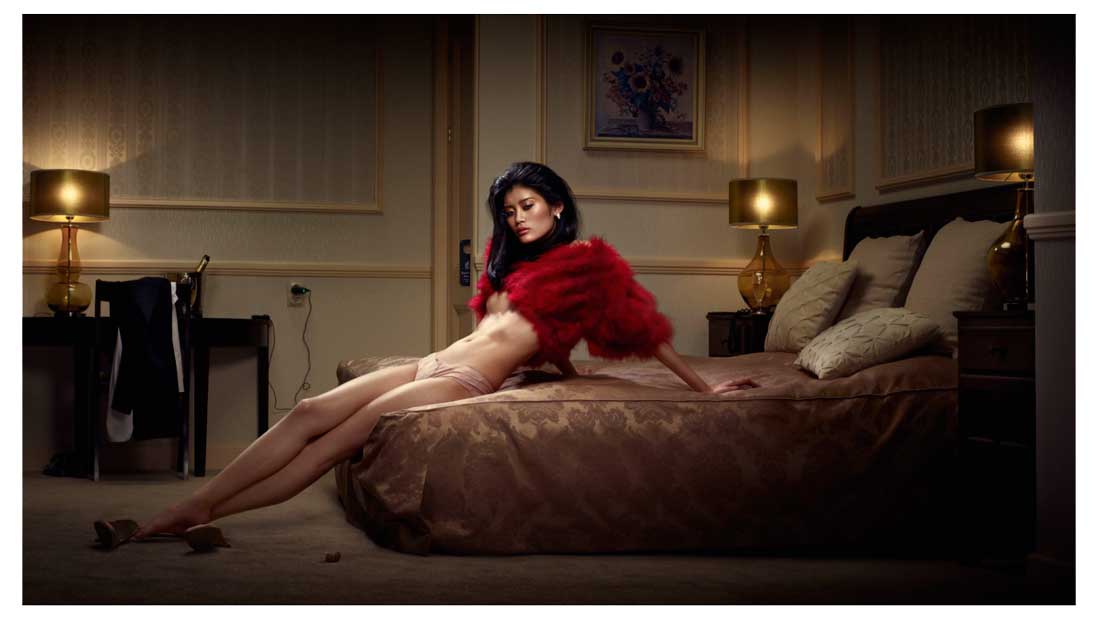 “The Hotel series is about alienation and the subtle range of dark emotions it causes in a person. The hotel rooms I sleep in when I travel are all different, but the feeling they convey is always the same, a sort of detachment takes place. ”

With these words Erwin Olaf comments on his Hotel series in a 2011 interview.

As is his habit, the Dutch photographer chooses for this series to investigate a specific and unique state of mind in all its facets and interpretations, from the most common and superficial ones to the most unusual and obscure ones.

If the Hope series (2005) explored the feeling of hope and expectation even in its less obvious and more disturbing implications, and in Grief (2007) a geography of sadness and pain took shape, Hotel (2010) focuses on alienation and suspension derived from loneliness and detachment from the outside world.

The anonymous hotel rooms in which the subjects are portrayed are closed and isolated boxes in a dimension absent from real time, in which the characters appear trapped in a bored wait.

The beautiful female nudes in the photos are wrapped in sophisticated velvet atmospheres that subtly evoke the different cities in which the hotel rooms are located. The ambiguity and sense of nostalgic frustration that the images convey contrast with the meticulous perfection of the details of the representation, confirming once again the artist’s ability to reconstruct the context and the scene down to the smallest detail, with an almost cinematographic to make-up, hairstyle, dress, piece of furniture, in the light of the environment.

Once again you find yourself immersed in a muffled atmosphere inspired by the fifties and sixties, in which quotes from the great masters of Italian cinema such as Pasolini, Visconti, Fellini emerge. However, in this series it is not so much the nostalgia that interests Olaf, or the regret of a past time, but rather the aesthetics of an era capable of expressing the complexity of the human soul in a profound, attractive and sensual way, also exploring its more hidden sides through an anthology of beauty.