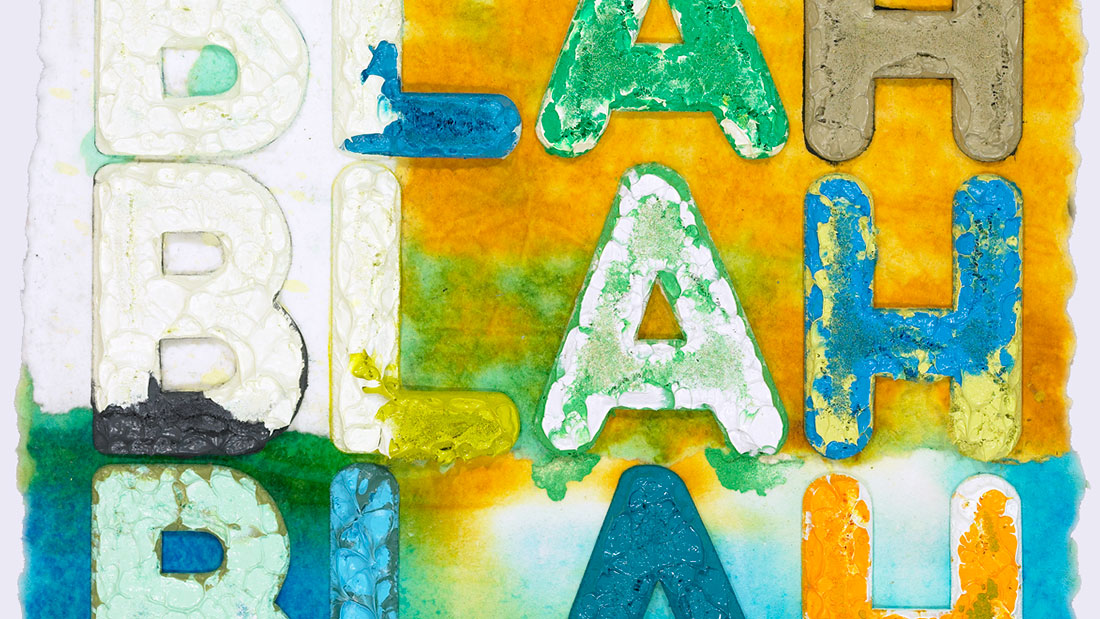 We live in an era that we could define as Trans-modern, since in the continuous world of communication, everything happens transversely, in an oblique and continuous way, without any distinction of spheres, genres, categories. As the philosopher Edgar Morin has acutely observed, this is the age of complexity, in which every single element of living is closely linked to the other elements of the complex system of which it is a part.

And if you think about it, the connection, the shaded area that cancels the boundaries and erases the borders between things, between facts, making every possible experience mobile and liquid, is precisely the language, a fluid and ductile, manipulable, elastic tool.

The trans-modern language is a mestizo, creole language, made up of neologisms, of invented, crippled, incorrect terms, terms borrowed and adapted to the needs of each linguistic context. The level of contemporary communication could be defined as “media-media”, easily and universally understandable, simple, of immediate accessibility, not too specific or in-depth, structured in such a way as to intrigue and asleep at the same time, to induce a superficial listening, to create a continuous spoken background that does not require specific attention but at the same time communicates clear messages with immediate effect.

Far from naming real objects or things, the words of contemporary man often no longer even have a referent in the world of phenomena, they take the place of facts, anticipate them, replace them. We talk about everything, at all times, submerging the real in a quantity of words such that, in the end, what remains is only the confused and chaotic sound of the things that are said, while the things that are said have in the meantime disappeared. , forgotten, lost. The truth told and told takes the place of the lived one. Contemporary language produces virtual reality.

Mel Bochner seems to be well aware and keen observer of all this, of which Metroquadro presents the most recent works on paper. Starting from the Thesaurus, the English thesaurus, Mel Bochner chooses commonly used words and expressions starting from the standard term, the one that appears as the first entry in the Thesaurus. Then he declines them in increasingly less formal and more colloquial variants, up to the vulgar expressions, creating a linguistic chain that slowly slips the meaning of the initial term into many possible alternatives that are distinguished by the effect they have on those who read them or pronunciation. What results from this process is a lexical cascade, in which the commas between one word and another are short pauses that allow you to catch your breath, because otherwise the conscience would find itself lost in the endless flow of meaning.

In one of these works of 2003 the expression “Blah-blah-blah” appears as the last entry. The original term, which appears first in the work, is meaningless, without meaning. It seems to be precisely the reflection on the lack of meaning of the flow of words that characterizes the trans-modern era that interests Bochner in subsequent works. Blah-blah-blah has been the central subject of oils on canvas and velvet and papers since 2007. What appears before our gaze is the image of contemporary communication, lost, grotesque, almost ironic in its being both redundant and empty. So absurd as to perhaps arouse a subsequent passage in the artist, a resounding laugh that materializes in the most recent work, from 2011, entitled “Ha, ha, ha”, present in the exhibition.

Words take on a tangible concreteness and chromatic vitality in Bochner’s works that transform their value. If meaning is lacking, if it is the possibility of bringing language back to the real world that fails, language finds a new materiality in Bochner’s works. He himself, considered in spite of himself as one of the fathers of conceptual art, returns with these works to the artistic technique par excellence, painting, creating works that in fact have no “concept” or message, since there is no meaning in the written words. . Deprived of their semantically distinctive value, the forms of the letters take on a new value, which is purely visual, chromatic, sensual and captivate the observer for their aesthetic and formal, tangible, sensitive qualities. If it is no longer possible to understand the meaning of the words we hear, read, see every day, Bochner seems to be saying, at least we can try to return to a primary form of knowledge of the world, the first and perhaps the only one that the human being has available, that is, experience. And the experience starts from the senses, from perception, from observation. In front of the material letters, in which the oil color is visibly concrete, in front of the thick paper, manufactured by hand and pressed with steel plates, in the face of the almost didactic evidence of the executive technique, in the face of the craftsmanship of the Bochner’s works on paper we can only take note of the evidence, that is, that what we have at our disposal are only sensitive objects, shapes, colors, materials, behind which we discover the enormous emptiness of today’s language hiding. Perhaps with a little bit of horror vacui, we accept that the only thing left for us to do is watch and wait.

“As for the choice of yiddish (..) it is the language that my parents and grandparents spoke when i was growing up. It is the original “ghetto” (named, as you know, after the area jews were permitted to live in medieval venice) language, an ironic and skeptical, and often scatological view of human nature, unrefined and indifferent to polite taste. ”