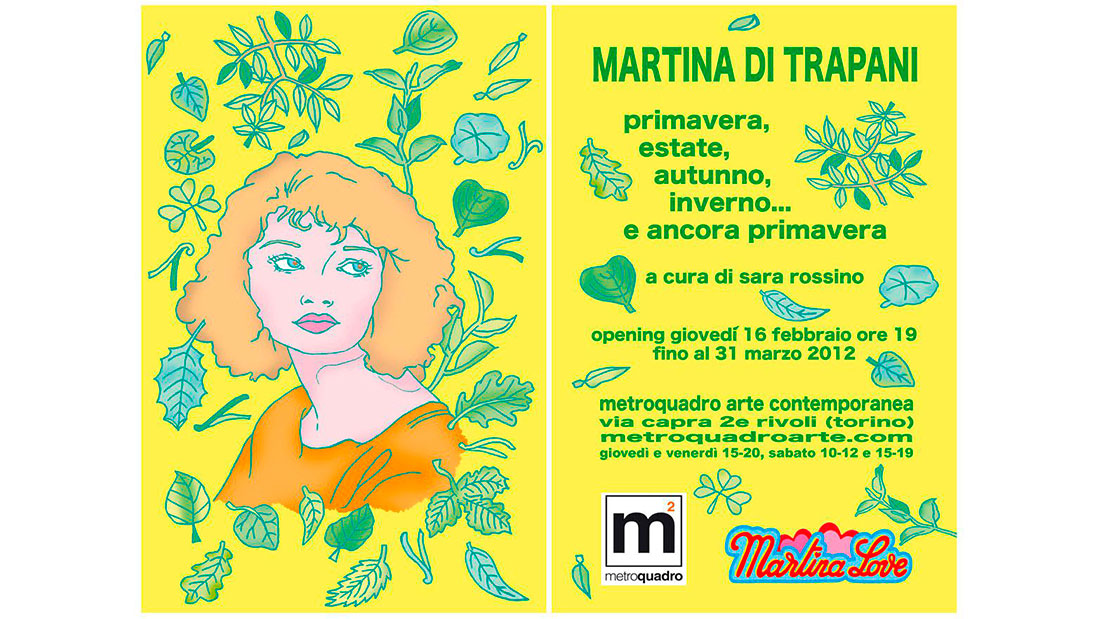 As the title itself reveals, with the exhibition at Metroquadro the Palermo artist Martina Di Trapani makes a tribute to the film by the Korean director Kim Ki-duk, entitled “Spring, summer, autumn, winter… and spring again”.

“In addition to being beautiful, this film is a pearl for the soul. A new reflection on the human being. It is the story of life that takes place in a place that is not a place, the seasons pass, and each of them is a period of existence, lived between happiness and drama, under the vigil of an inevitable and irreplaceable spirituality. A balance, always so fragile and above all temporary … ”

Thus Martina explains the choice of the film for this new series of works.

The exhibition, like the film, is configured as the story of a year, marked by the alternation of the seasons and the events that follow one another over that period of time.

A clipping in the life of the artist that becomes the pretext to tell life in general in its most varied forms, to search for its meaning, the beauty that is constantly present, even if hidden.

From “encounters” and clashes with the world of cinema and music, but also with the events of life and with everyday events, the present time of listening and vision breaks through and expands into the dimension of painting, in which I dream , sentiment and story are confused to create narrations that are often suspended, interrupted, not necessarily real, but always plausible, precise details of an individual story that takes on the value of all possible stories.

Martina’s works seem to remind us that, just like the monk in Kim Ki-duk’s film, he knows and faces different stages – injustice, pleasure, disappointment, pain, hatred, melancholy, death – each of us he knows he has to deal with the changing seasons. Each one corresponds to a stage in the individual’s maturation, each one is characterized by a different level of awareness, which allows one to face the subsequent stages with greater confidence and strength.

The following spring will not be the same as the previous one, but it will inevitably come anyway.

As in the film, the constant background of the alternation of seasons and events in the life of the monk is the surreal and magnificent one of Lake Jusan, an island that seems suspended out of time, for Martina there seems to be an equally magical and decisive landscape, a place of refuge and reference point to return to with regular determination … Love, love, understood in its infinite forms and interpretations.

It is no coincidence that Martina has chosen to sign her own ballpoint drawings, made for the weekly Cronaca Vera and presented in the exhibition, as Martina “Love”.

Hers is a romantic vision of existence, which is faced by Martina Love without unnecessary frills or excessive manifestations, with the dry reserve and calm determination typical of the people of her land.

Thanks to the silent but tenacious search for love in every moment of life for Martina it is really possible to say with certainty that after the long winter it will be… again spring.