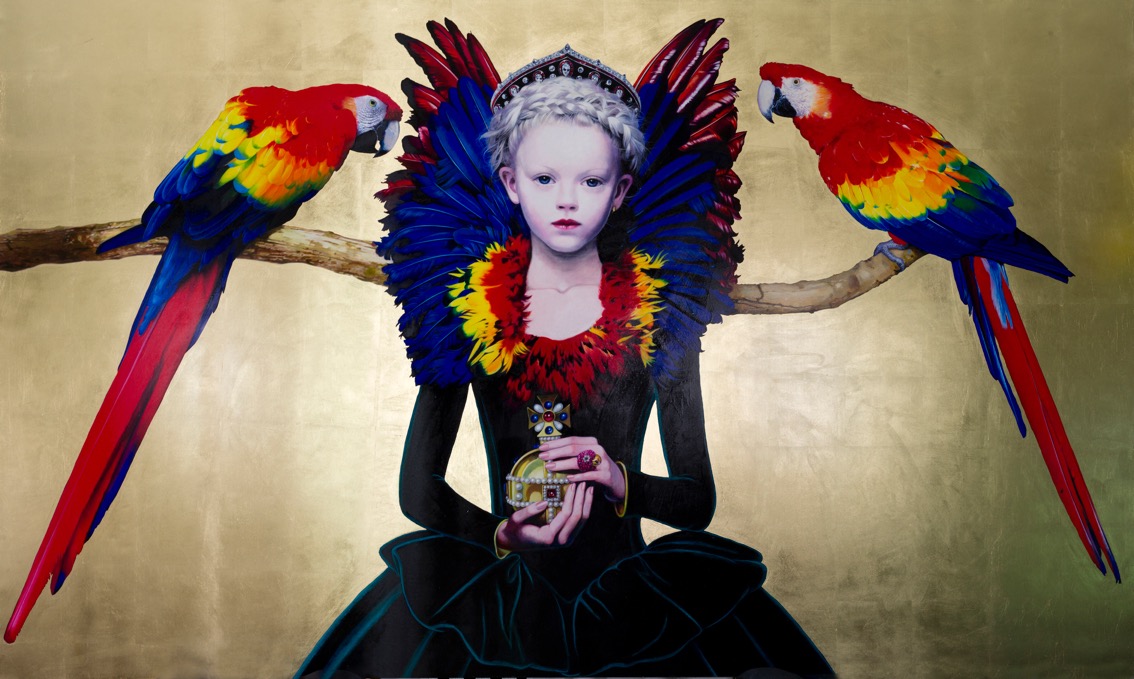 Posted at 21:05h in mostre by Marco Sassone
Share

from Nov 29 – Jan 26
metroquadro, Corso San Maurizio 73/F, Torino
open Tue – Sat 4 – 7 pm
opening on Thu Nov 29 6:30 – 10 pm
in collaboration with:
Vincent Tulipano,
Via della Rocca 6F, Torino
where the Titti Garelli’s line of accessories will be on sale
metroquadro presents QUEENS, a group of original works by Titti Garelli. These Neo (Gothic) Queens are an evolution of the previous series, Bambine Cattive (Bad Little Girls). Time has passed, now the girls have grown up,  still combining the present with the painting and culture of the past, these Queens are their obvious development, adding an omage to the artist’s fascinations,
a game drawn from the web aesthetic, populated by gothic-dark-kitsch images, mediated by videogames, by Nordic mythology with   Japanese influences.
Fed up of hearing the word “gothic” associated with disturbing atmospheres, Titti Garelli with this cycle wants to take the term to its origins, when ‘ International Gothic’ meant very refined and skilled painting, appreciated in the main centers of European culture. Combining an incredible technique and a great erudition
her works hit the mark, inducing a feeling of enchantment and wonder.
Titti Garelli’s work, as in the ‘Bambine Cattive’, almost always starts from pre-existing images, stolen from old magazines and printed material she’s been collecting for years and which she reinvent  for her creatures, giving them a Real (not Virtual) Second Life.
“The characters conceptuallty are the daughters of my literary and cinematographic passions: Neogothic andf pre-Romantic Literature, ‘800 popular novels  and  Romantic Poets, Horror and Fantasy movies,  from Murnau’s  Nosferatu to Herzog’s, but always with a careful attention to the Contemporary, to the Instant-Book, to the daily news, or maybe just to some everyday’s food or drink.
The other big inspirational monad is the Painting from the Past, the one that explained itself, and from which I stole (quote?) collars, jewels, mantels, mixing them with others absolutely contemporary, to create a game of ambiguous timelessness, where it’s not important to identify the source, but it could be amusing discovering it, like in a word puzzle.”
Titti Garelli
Titti Garelli was born in 1948 in Torino, where she lives and works.
She graduated at the Accademia Albertina di Belle Arti di Torino. Gifted by an extraordinary technique, since 1990 illustrated the most famous advertising campaigns in Italy and abroad.
From mid ’80s  she’s been exhibiting her series of paintings in numerous solo and group shows in galleries in Italy and abroad.